Selecting an action and chambering for a new varmint build is always rewarding.  You learn more about the cartridge of choice while deciding which one fits the current need. I have been shooting 6.5s for years and figured the Swede 6.5×55 cartridge would need a second look.  The challenge would be to rechamber a standard military action “ a 1903 Swedish Small Ring M96 Mauser “, with a listed breech pressure from 45000 psi to 66000 psi (Bolt Action Rifles 4th edition by Frank de Haas & DR. Wayne van Zwoll). An Ackley Improved case looked like a excellent option.  With all variables kept the same i.e. barrel length, twist rate, and bullet weight, a minimum 6% gain in velocity would qualify for an Ackley project. The blown out Ackley brass is capable of a 13.7% gain in velocity over the standard cartridge, with a listed velocity of 2900 fps using a 140 grain bullet it is a vast improvement over the standard 2550 fps. I chose to chamber the little Swede in 6.5×55 A.I. 40 degree shoulder also known as 6.5×55 BJAI   “Bob Jourdan Ackley Improved“, another factor that favored the  Swede build was that the bolt has gas vents ( a safety factor for a ruptured case or primer )

The build began with updating, squaring and sporterizing of the military action: forging bolt handle, tang contouring, polishing feed rails, lapping lugs, receiver squaring  and chasing receiver ring threads, drilling / tapping for scope mounts.  A #4 contour ( 1.125” dia. ) 4140 steel bull barrel was ordered from E.R. Shaw and since this was a nonstock chambering I needed to ship them the necessary tooling to short chamber this hopeful tack driver. My next call would be to Richards Micro-Fit Stocks in California for a Carlo Walnut Straight Line Thumbhole stock, I made good use of my time while waiting for the barrel and stock to arrive by fine tuning the trigger guard.  The trigger bow was reduced in width and tapered to reveal a sleek appearance, it is inspiring to see with each pass of the end mill cutter that the military aspect of the Swede grew more distant and a contrasting sleek look became clearer. The bolt was jeweled and bolt cocking piece laith turned and tapered then fit with a Beuler low safety. All metal parts were bead blasted and blued with the bottom metal floor plate embellished with a hopeful logo “SUB-MOA“. After some searching a low pull weight target trigger was a difficult item to find. A call to Huber Concepts revealed that minor sear modifications to the M96 Swede would allow me to install a Mauser M98 Match Grade Trigger with a 27oz pull weight. The people at Huber Concepts really know their triggers, are very friendly and willing to offer any help with your current needs.

Once the barrel arrived I fit and headspaced it to the action. The Richards stock was shaped, bed and given a gloss hand rubbed finish. I use High Score Pro Bed 2000 to bed the action from the rear tang to 1.5” in front of the receiver ring; this gives support to the bull barrel while still allowing it to be free floated. A complete bedding of the trigger guard metal has proven very effective on previous Mauser actions I have built so I stick with this method. Topping off everything were Redfield rings and base with a BSA Platinum 24×44 A/O scope. Redding dies would be needed to reload the 300 rounds of new Speer 6.5×55 brass after fire forming. After reading pages upon pages from reloading manuals and consulting on-line information regarding types of powder and burn rates the 6.5 Ackley likes. I decided to start development with IMR 4895 for fire forming and IMR 4831 for newly formed cases, yes I know 4831 has a slow burn rate and I was told to use a faster one, however I discovered many 1000 yard shooters referring to how the 6.5×55 Ackley always seems to like 4831 very very well. Referring to P.O. Ackleys book “handbook for shooters and reloaders“ and www.imr.com starting loads were developed. Cases were prepped by deburing the flash holes, annealing the neck and shoulders and neck sized.

A charge of 42.5 grains of IMR 4895 powder was ignited by CCI Benchrest primers pushing the Sierra 85 grain Varminter H.P. bullet out of the 1-9 twist tube at a velocity of 2900+ fps. I had decided to polish the chamber to a near mirror finish after researching the topic regarding case/chamber grip, the results proved to be quite pleasing with very smooth extraction and no gas bleeding past the cartridge. The newly fire formed brass reviled a crisp shoulder angle and perfect case form with no high pressure indicators. To my surprise after bullet seat depth was adjusted deeper to 2.756” cartridge O.A.L. the 85 grain bullets printed quite well out at 100 yards. This proved to me that “SUB-MOA” was well with in sight as a 3 shot group measured 0.122” center to center! A further adjustment of the bullet seating depth was made; I went .014” deeper to obtain an O.A.L. of 2.742”. Range results proved that occasional bug holes were the norm. so the previous 2.756” would stay. I had good intentions of trying different powders during fire forming but its rare that the first load development works so well. With an accurate load for fire forming brass finished the next step is fine tuning a load for the Ackley cases.

The newly formed Improved cases were cleaned and neck sized only. A charge of 46.5 grains of IMR 4831 was found to be an accurate load at 2730fps producing a 0.132” 4 shot group at 100 yards. The Sierra 123 MatchKing bullets settled in at 0.025” from touching the lands in the bore, further powder increases proved that at 48 grains of IMR 4831 and 2800fps another accurate 4 shot group printed at 0.149” at 100 yards. It seems IMR 4831 is the powder of choice for this rifle, again I stumbled across an accurate load with my first powder choice. In conclusion the loads developed for this rifle are safe in THIS RIFLE and should be worked up gradually if used in another rifle, while checking for pressure signs. This was a very enjoyable and rewarding project build and proves that an M96 Swedish Mauser action can be built up to be a very accurate and safe shooter. With less than ¼” groups a common sight it proves that a 6.5×55 Ackley Improved can really drive tacks! As I look out the window and winter melts away I think about egg shoots coming up in Michigan in a few months, I may just show up at a match with Miss Ackley and enjoy a day with this fine shooting ¼ minute Mauser. 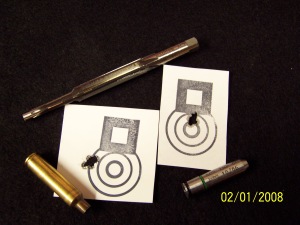 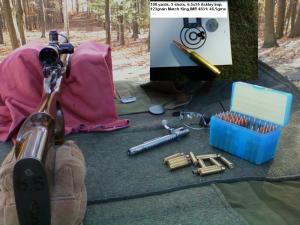 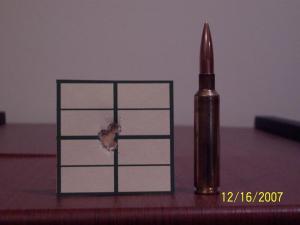 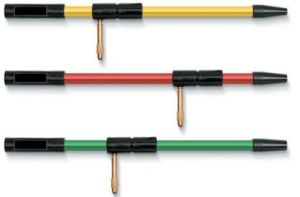 One Insert bore guide into receiver and chamber.
Two Run one wet patch of Hoppies #9 through the bore and let soak for approximately 30 seconds. Then run a correct bore size brass brush thru the bore (one pass for each round fired) another wet patch of Hoppies then dry patch out the bore.
Three When passing the cleaning rod thru the bore use a folded paper towel and hold it against the muzzle. this way when you feel the jag or brush exit the crown you can guide it out and back in to protect that expensive barrel.
Four Follow the instructions on the bottle fo Sweets 762 solvent and clean until no copper is evident.
Five Use JB Bore paste along with Kroil to remove stubborn deposits and follow-up with JB Bore shine (follow instructions on jar of JB)
Six I follow by applying a patch soaked with LOCK-EEZ This is a graphite powder suspended in a solvent that coats the bore slightly before that first round fired through a dry bore. ( I picked this up at a NAPA auto parts store ). Clean out the chamber with solvent to remove any graphite and lightly coat with kroil if you are not going to shoot until a later date.
I have found this ( Lock-eez ) method to reduce if not eliminate those first round flyers.
Patch colors:
Green = lead
Blue = copper
white = Clean bore

As for cleaning rods I use stainless steel and coated rods. One piece! stay away from the screw together sectioned rods especially aluminum (partials can embed in the rod).

Clean bores and tight groups keep rounds in the X-ring