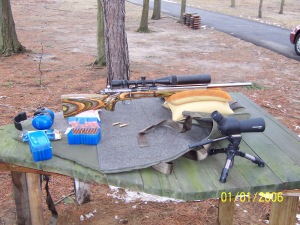 I’ve been shooting / reloading and buildings rifles for quite a few years and have realized the desire for small caliber varmint rifles. After a quick inventory of my battery of rifles, I noticed there was a M98 VZ24 Mauser action collecting dust. (Not really- just well oiled and tucked away.) After inspecting the receiver and bolt, the idea for a tack driving bench varmint rig was hot on its way. I decided on the 22-250 Rem. due to its classic accuracy and range. I have a small gunsmithing shop at my home, so the first stop was an order for forging blocks and heat sink to turn down that bolt handle. Following the grinding, filing and buffing, the bolt was ready for jewling. Then the Buehler low safety was installed along with a 26 lb. firing pin spring (Wolf). The bolt was finished and I was very happy with the end result.

Next, the receiver was checked for squareness and warp and the rear tang was tapered to give a sleek smooth approach for the bolt/stock fit. The receiver was then set in a jig, drilled and tapped for bases and the barrel threads chased with a standard 60-degree tap. Then the bolt lugs were lapped for a better fit with the receiver and the receiver rails polished for glass-smooth bolt push. I decided on a matt finish for the receiver so into the blasting cabinet it went. A heavy bead blasting resulted in a very nice finish for bluing and the results were pristine. An order was placed for an Adams and Bennett stainless steel bull barrel, .050 short chambered. Upon arrival, inspection proved to be excellent. Into the barrel vise for fitting to the receiver came next. Then I hand finished, reamed the chamber with a PTG finish piloted reamer, and checked for proper headspace with forster gauges. All the while this project was progressing, I had ordered a laminated stock from Richards Micro-Fit Stocks, marksman style in camo laminate.

It seemed like everyday I was eagerly opening a UPS package with more mauser varminter goodies inside. A Bold Premium trigger was fit to the receiver and I stayed with the factory heavy 2 lb-8 oz pull (just a starting point, you know) and a Leaupold one piece base was installed.

The trigger guard was modified for a sleeker look and finished to match the receiver. When the stock arrived, it was just what I wanted – a semi-inletted laminate with a slightly smaller barrel channel. Out came the rasps, files, bedding tools, and lots of sandpaper in varying grits. When I was happy with the shape and smoothness, pillar bedding was next. Then a steel rod bedded in the stock to help stiffen the recoil lug area. After reading several Gunsmith Kinks articles I decided to also bed the trigger guard along with the action. Pro Bed 2000 was the ticket for this task and it turned out as smooth a bedding job as ever! All the stock prep work was followed with a hand rubbed oil finish until a high gloss was attained. My next task was to make a custom fit steel butt plate that would display what I hoped would be what a varmint rifle should shoot. “MOA” was then placed on the butt plate and removed after sand blasting the piece. The bluing revealed a shinny logo stating “MOA”.
The end results of a VZ24 Mauser rebuild turned out to be one very nice looking bench shooting varmint rifle, weighting in at 10 lbs! A quick trip to my shop revealed a Leaupold VX1 4-12X40 scope on a 30.06 that didn’t see much use. So on the Mauser it went, along with Stony Point target knobs and bore sighting.

*ALL LOADS LISTED SHOULD BE REDUCED 10% AND WORKED UP SLOWLY, CHECKING FOR ANY HIGH PRESSURE SIGNS*

Factory ammo was purchased for seasoning the bore and much needed left over brass for the Forster Bench Rest dies to roll out some tack driving loads. The first day on the range proved to be a bitter cold February day around 20 degrees, but clear. After a proper settling in of the bore, factory ammo was grouping under one inch at 100yrds. Not bad for bulk Winchester ammo with that weird looking crimped tip on the bullets. No signs of headspace problems were evident so to the loading bench I went. Nosler Ballistic Tip 50 grn bullets were chosen along with the classic H380 powder at 37, 38, 39 grns to check for accuracy. The next trip to the range was warmer. The morning temperature was 40 degrees, clear with no wind. The best results were with the 37 grns of H380, which revealed a group of 0.338” for four shots with the fifth shot just outside of the ragged hole. I was very happy with the accuracy of my Mauser varminter! But accuracy is a thing of constant pursuit, so back to the loading bench to try different primers, however the overall cartridge length of 2.460” would be maintained. That placed the bullet ogive 0.030” from the rifling which proved to be a liking for this 26” 1 in 12 twist air gauged barrel. Case trim length of 1.90” would also be kept for uniformity.
The next trip to the range was windy and 55 degrees. The Winchester magnum primers proved to be a major step backwards with a five shot group opening up to a terrible 1.340”. A quick ammo change back to the large rifle primer loads proved a much better grouping at 0.400” (slightly larger than the previous results of 0.338”).

So after the range work was complete and several hours working up loads, my “MOA” Mauser was shooting SUB-MOA groups and I was pleased…until I pulled out the 55 grn bullets. The quest for accuracy continues! Did I mention that I also found a small ring Swedish Mauser action that I prepped the same way while doing the M98 action? Perhaps a Wildcat chambering would be a good choice. But that’s another story.